Properties of the normal distribution

Hence the histogram for a normally distributed variable has a bell shape as shown below (note the percentages displayed here are given to two decimal places, while the percentages above are rounded values; also note that the \(\mu\) and \(\sigma\) symbols represent population mean and population standard deviation respectively):

If you would like to practise interpreting a normally distributed data set, have a go at the following activity:

Since many inferential statistical tests rely on the assumption that a sample of continuous data approximates a normal distribution, it is important to be able to test for this. Unfortunately though there is not a single yes-or-no test for normality, and rather it requires assessing up to eight different factors in order to determine if the data approximates the normal distribution ‘closely enough’ (the data will never be perfectly normally distributed, and often a fair bit of deviation is acceptable). While some of these tests are more commonly used than others, it is a good idea to evaluate as many as possible, particularly when you are first getting started, as the more information you have means the more complete of a picture you will have of your data, and the more well-informed your conclusion will be.

The eight statistics and graphs you can interpret, in no particular order, are as follows: 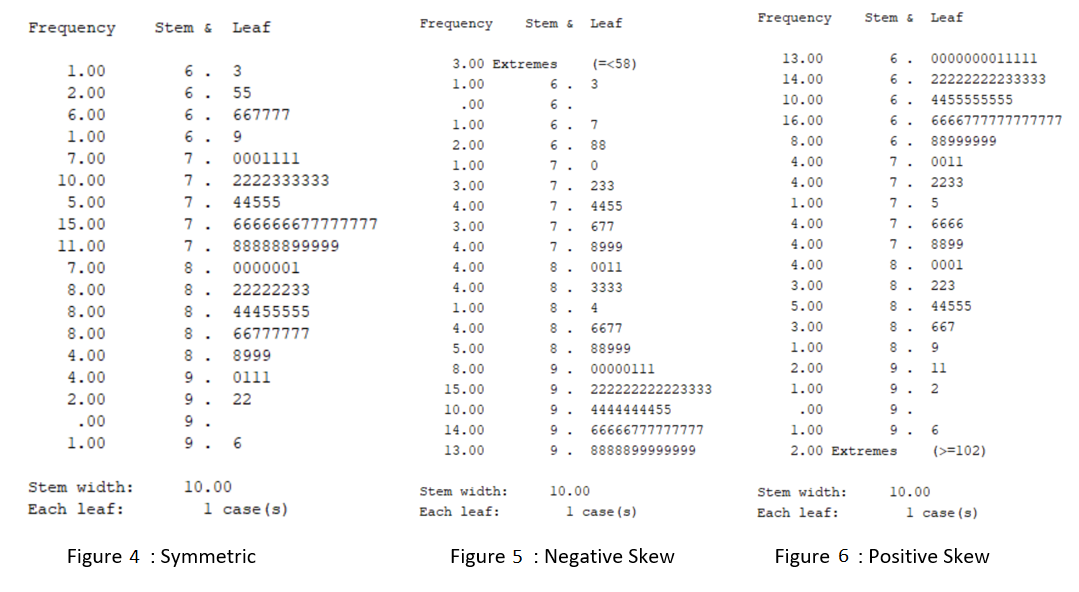 After analysing the data relating to these tests of normality, you should come to an overall conclusion based on what the majority of the tests indicates. For example, your conclusion might be that the data is approximately normally distributed, or it might be that it is positively or negatively skewed.

For a worked example of assessing normality, you make like to view the Introduction to SPSS module. You can also practise assessing whether or not data approximates a normal distribution by having a go at the following activity:

If tests for normality indicate that the variable is not normally distributed, you can try transforming the variable so that it conforms more to the normal distribution.

To transform a skewed continuous variable, you can apply:

Once the data has been transformed, it should be tested again for normality. If the transformation has ‘worked’, any further inferential analysis should be conducted on the transformed data. If it hasn’t, you will need to use non-parametric tests instead.