This page details ways of displaying and of using descriptive statistics to perform univariate and bivariate analysis, for both categorical and continuous data.

Displaying data for one categorical variable

One way of displaying data for a single categorical variable is by using a table , or in particular a frequency distribution table. This is a table which displays the various categories for a variable, along with the corresponding frequencies (i.e. how often each category occurs in the data) and usually associated percentages (sometimes including cumulative percentages , which give the sum of all the percentages up to and including that row of the table).

For example, the following is a frequency table showing the frequency of each category of marital status in a sample of 80 people, along with the corresponding percentages: 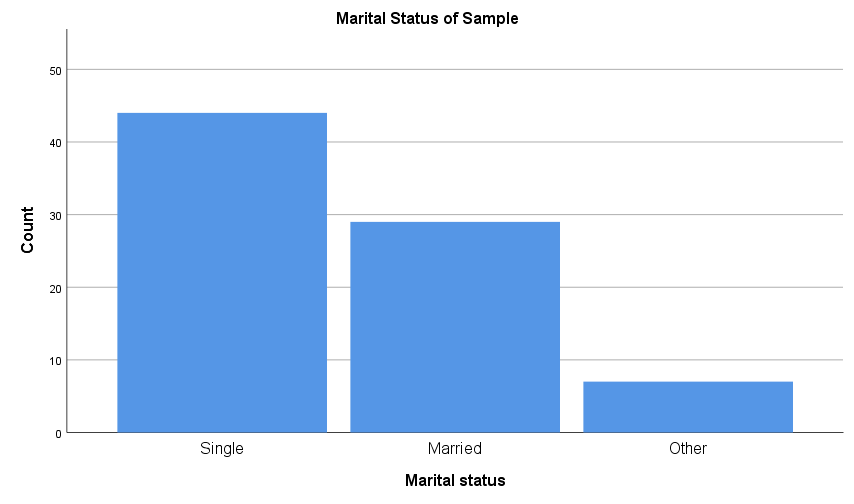 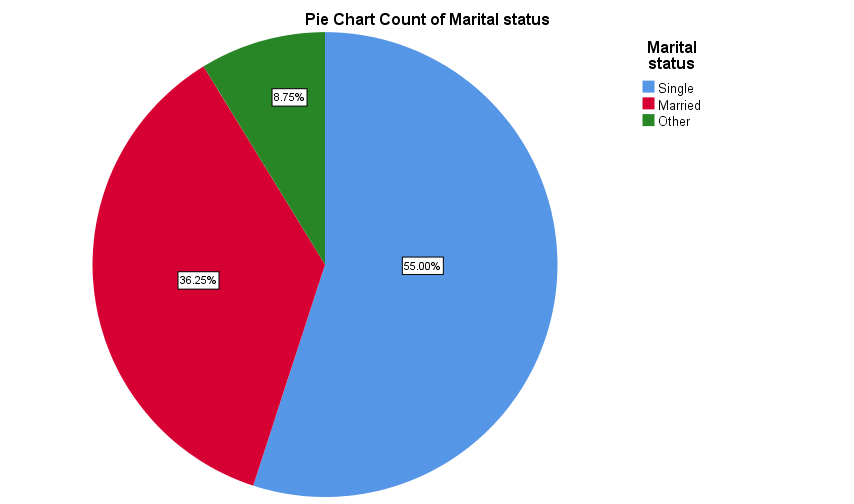 Descriptive statistics for one categorical variable

Descriptive statistics used to analyse data for a single categorical variable include frequencies, percentages, fractions and/or relative frequencies (which are simply frequencies divided by the sample size) obtained from the variable’s frequency distribution table.

For example we can describe the sample of data for the marital status variable from the previous section by selecting some key values from its frequency distribution table, such as:

If you would like to practise analysing data for a single categorical variable, have a go at the following activity:

Displaying data for one continuous variable

Continuous data for a single variable can also be displayed in a frequency distribution table, but the data first needs to be grouped into bins (also known as class intervals). These should be chosen based on the data, but they should generally be of the same size and ideally there should not be too many.

For example, the following is a frequency distribution table showing the frequency of ages of a sample of 80 people, once they have been sorted into bins: 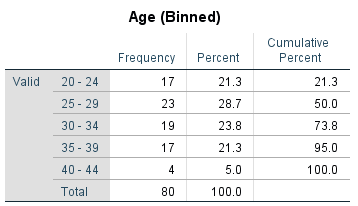 As for graphs that display continuous data for a single variable, one of the most commonly used is a histogram. These have the following properties:

Note that different versions of a histogram can be created for the same variable, depending on the bin (class interval) width used. For example, the first histogram below uses bins of width one, while the second uses the bins as shown in the frequency distribution table above. The software you use to produce your histogram will typically decide this for you, so it is not something to be overly concerned about, but if you are wanting to create or manipulate your own histogram keep in mind it is just a matter of choosing a bin width in accordance with the level of detail you wish to show: 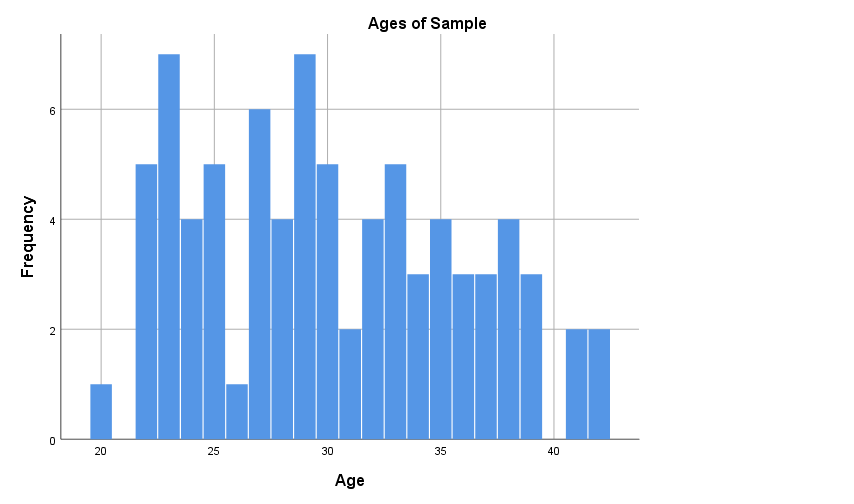 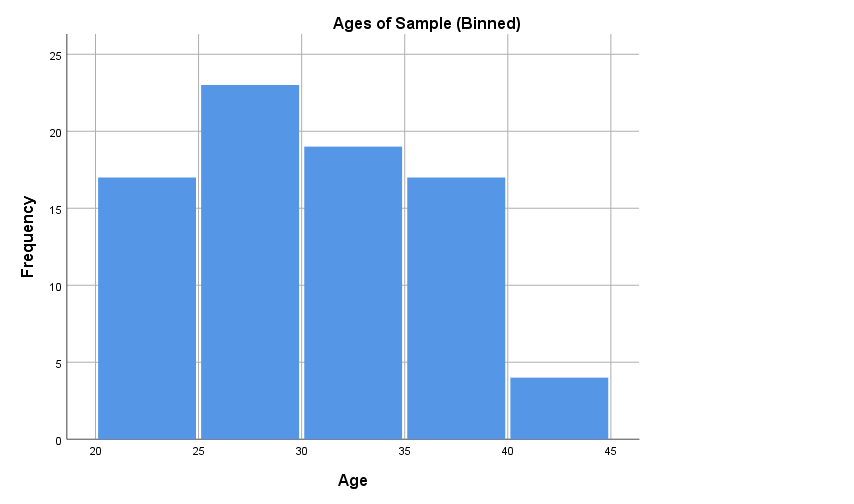 Another graph used to display continuous data for a single variable is a box plot, which is a diagram showing the way the data for a variable is distributed. For example a box plot for our Age variable is as follows (click on the plus signs to learn about the key features of the graph - some of these are explained in more detail in the Measures of central tendency and Measures of dispersion sections below):

Descriptive statistics for one continuous variable

It is important not only to understand how to calculate and interpret the various measures of central tendency and dispersion, but to know when it is appropriate to use the various types. All this is explained in the following two sections.

The most common measure of central tendency is the mean , otherwise known as the arithmetic average, which is calculated by adding together all of the data and then dividing through by the total number of values. The sample mean is denoted by \(\bar{x}\), and for a sample of size \(n\) the formula for calculating the mean is written as follows (note that \(\sum\) represents the sum of all the data):

For example, the mean of the following sample of ten ages:

can be calculated as:

While the mean is typically used as the measure of central tendency for continuous data, it may not be appropriate if the data set is badly skewed, contains outliers or if the variable is censored (not fully observed). In these situations the median is more suitable. This is the midpoint of the distribution, which is calculated for a sample by sorting the data from smallest to largest and then finding the middle value (or the mean of the middle two values if there are an even number of observations). For example, putting our sample of ten ages in order gives:

and the median is then the mean of the middle two:

Finally, the mode is the most frequently occurring value (or values) in the sample (if there are two or more values that are equally common we quote them all, rather than finding the average). Note that the mode may not necessarily be anywhere near the middle of the data set, and hence is not necessarily ‘central’, but it is useful when the most common value is of interest. For example, the mode of our sample of ten ages:

Note also that the mode can be, and is most often, used for categorical data.

If you would like to test your understanding of the mean, median and mode, have a go at one or both of the following activities.

The simplest measure of dispersion is the range ; this is simply the difference between the smallest and the largest value in the sample. For example, the range of our sample of ten ages in the previous section is \(13\) (i.e. \(28 - 15\)). While the range is easy to calculate, it is usually of limited use as it takes into account just two values in the data set.

A measure of dispersion that takes into account more, if still not all, values in a data set is the calculation of percentiles. These measure position from the beginning of a data set (when it is sorted from smallest to largest), and can be used to measure the relative standing of a particular observation. For example, stating that a child is in the \(97\)th percentile of a sample for height means that he or she is taller than \(97\%\) of others in the sample. As another example, our sample of ages contains only ten pieces of data so lends itself nicely to calculating percentiles that are multiples of \(10\). Have a look at some of these in the diagram below (click on the plus signs to find out about the different percentiles):

A specific type of percentiles which divide the sample into quarters are quartiles (as shown on the box plot above). For example the:

The quartiles for our sample of age data are as follows (note the different colours for each quarter of the sample; click on the plus signs to find out about the different quartiles):

Once you have determined the quartiles you can determine another measure of dispersion; the interquartile range. This is the difference between the first and the third quartiles, which is \(7\) for the example above. The interquartile range is quoted in conjunction with the median in situations where the latter is more appropriate than the mean.

In all other situations the mean and standard deviation are usually used to summarise a sample. The standard deviation takes into account all of the values in a sample, and is calculated by finding the deviation of each value from the mean, squaring the result, then adding them all together and dividing by one less than the sample size. This gives yet another measure of dispersion, known as the variance , and then taking the positive square root of this gives the standard deviation- which is more appropriate as it is measured on the original scale of the data. The formula for the standard deviation (\(s\)) of a sample of size \(n\) is:

While standard deviation, along with other measures of dispersion and central tendency, can be calculated using various software, it is also good to understand how to determine it manually. For example, to calculate the standard deviation of our ten ages:

Next, calculating the deviation of each age from this mean gives:

and squaring these gives:

If you would like to practise calculating the range, interquartile range, variance and standard deviation, and/or to practise deciding which measure of central tendency and measure of dispersion to interpret, have a go at the following activity:

Finally, check your understanding of which measures of central tendency and dispersion should be used when, by completing the following:

Measures of central tendency and dispersion can also be used to test for differences in a continuous variable between different categories of a categorical variable. This is often done to compare means between groups.

For example, if we know that the first five people in our sample of ages are females and the second five people are males, we can compare the means of the two groups:

If you would like to practise comparing means, have a go at the following activity:

Cross-tabulations (or contingency tables) are used to investigate associations between two categorical variables for a sample. A cross-tabulation contains multiple rows and columns, with the categories of the independent variable in the rows and the categories of the dependent variable in the columns. Each cell of the table contains the frequency or number of subjects that fall into the combination of categories of the two variables, subtotals are given for each column and row, and a final total is given in the bottom right-hand corner of the table.

For example the following cross-tabulation displays data for two variables (gender and feelings towards statistics), for a (fictional) sample of 300 people:

Cross-tabulations also often include row, column and/or total percentages as applicable. To find out about these, click on the plus signs in the diagram below: 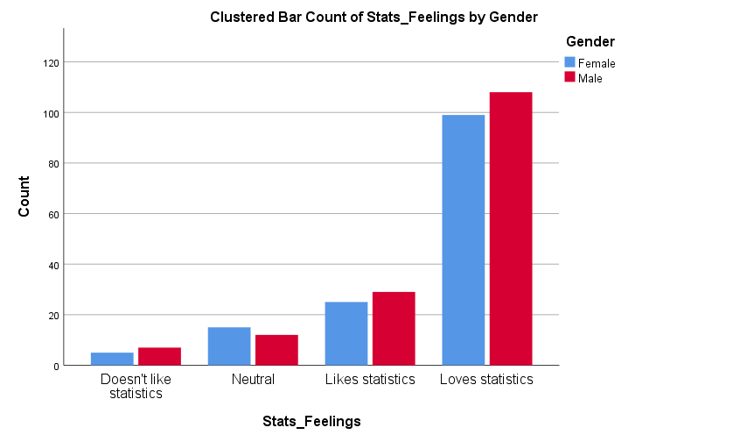 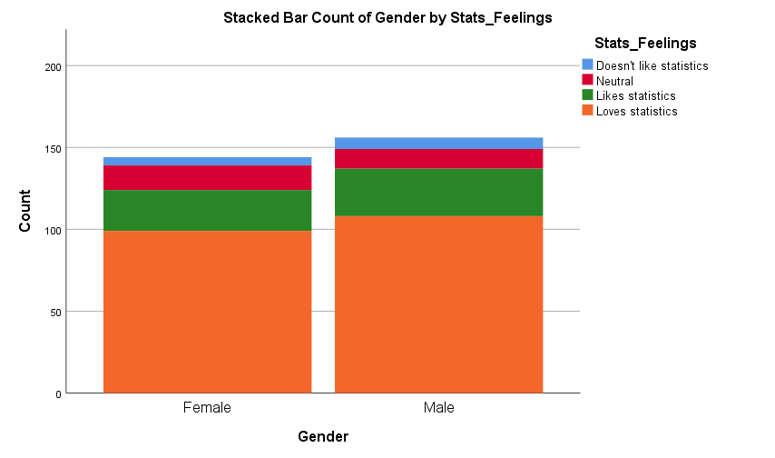 For some examples of how expected frequencies are calculated, and how they can be interpreted, click on the plus signs in the diagram below:

If you would like to practise interpreting cross-tabulations, have a go at one or both of the following activities. 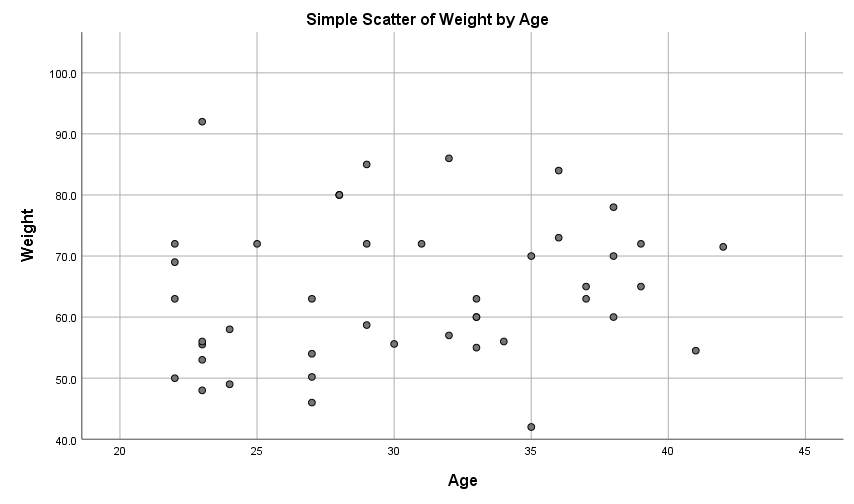 You can use a scatterplot to observe:

Finally, note that the strength and direction of a linear relationship (or lack of) between two continuous variables can be quantified by Pearson’s correlation coefficient (r).

For example if two variables that contain data for age and scores on a memory test have a correlation coefficient (r value) of -.72, it indicates that there is a strong, negative linear relationship between them.

For practise interpreting a correlation coefficient together with a scatterplot, have a go at the following activity: