This page takes you through some important concepts on the topics of measurement and geometry, with activities to consolidate your knowledge along the way. In particular, it covers how to do the following (use the drop-down menu above to jump to a different section as required):

For more sample questions on these concepts, in particular if you are preparing for the Literacy and Numeracy Test for Initial Teacher Education (LANTITE), you may like to visit the LANTITE page.

Finally, as you work through the content keep in mind that there are often different ways of solving the same problem. While in some cases alternative methods have been explained, for many examples just one method of working is provided. If you already know a different technique for solving the problem then that’s great (provided it is also correct, of course). Don’t feel you need to change your method - the important thing is that you use a technique that makes sense to you.

When solving a problem involving measurements, you need to ensure that all measurements of the same type are in the same unit. If they aren’t, you can convert from one unit to another by making use of the relationships detailed in the table above.

Example: Suppose you wish to tile the floor of a room that is \(3\textrm{m}\) wide with small tiles of width \(50\textrm{mm}\). How many tiles will you need to cover the width of the room?

Some other common equivalent measurements you may need to convert between are:

If you ever forget whether to divide or multiply when converting, just think about the relative size of the different units and whether the conversion makes sense (millimetres are much smaller than metres, for example, so you need a lot of them to make a small amount of metres). You can also use your knowledge of rates and proportion to ensure the conversion is correct (refer to the Ratios, rates and proportions section if required).

Example: Suppose you are considering purchasing a property that is listed as being \(5\) acres. How big is the property in hectares?

Once you have worked through the examples above, have a go at the conversion problems in the following activity:

Never underestimate the power of a simple diagram to assist you with solving a measurement problem, as they can be really helpful.

Solution: The first thing to do here is again to convert the measurements - having all lengths in metres only requires one conversion, so doing this gives \(25\textrm{cm} \div 100 = 0.25\textrm{m}\). Next, you might be tempted to find the area of the card and divide it by the area of the pieces you want to cut - but this doesn’t take into account the fact that you might have some unused strips of paper at the sides. A diagram illustrates this, and shows that instead you need to treat the length and width separately: 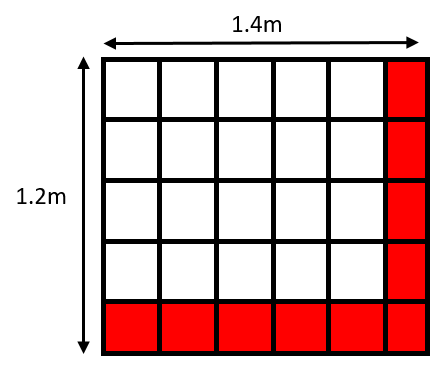 Once you have worked through the example above, have a go at using diagrams to solve the problems in the following activity:

Another concept you may need to work with measurements for is time. Some common calculations you might need to perform involving time include finding the duration of events and determining differences between times. There are a couple of different ways of doing this.

Once you have worked through the example above, have a go at the time problems in the following activity:

Once you are familiar with distance and time, you can use them to calculate the rate at which a distance is being travelled; otherwise known as speed. You can do this using the following formula:

Once you have worked through the example above, have a go at the speed problem in the following activity:

Being able to read maps and interpret directions is an important skill. The two types of directions you may need to interpret are the four cardinal directions (north, east, south and west), and left and right directions.

When interpreting cardinal directions on a map, there is often an arrow indicating which way is north (in the absence of this, it is safe to assume that north is at the top of the map). Once you know which way is north, there are different mnemonics you can use to remember the rest of the directions. For example, the letters in N ever E at S oggy W eetbix indicate that the clockwise order of the directions are N orth E ast S outh W est.

There are also intermediate directions located halfway between these directions, as illustrated: 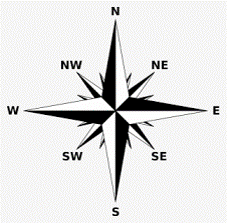 In terms of left and right, it can be helpful to try and imagine yourself orientated in the direction you are ‘travelling’ on the map (or actually reorient yourself or turn the map if possible!), as left and right will vary accordingly. And if you forget left and right, just hold both hands up in front of you and try to make an ‘L’ shape with your fingers and thumb- the one that looks correct is your left hand.

Example: Suppose you are travelling south down Conway St and turn left on Allen St on the map shown. Will you make it to the shopping centre? 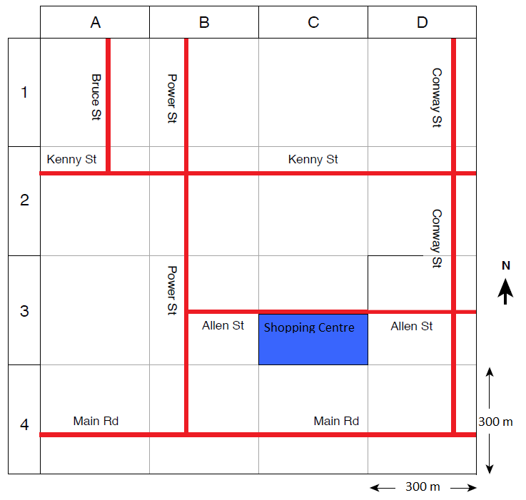 Solution: To figure this out, first note that north is at the top of the map, which means that south is at the bottom and that if you are traveling south down Conway St you are travelling ‘down’ the map. So try to imagine that when you get to Allen St you are coming at it from the ‘top’ side, facing downwards, and therefore that if you go left, you would go off the map and not towards the shopping centre. Alternatively, you might like to try and remember that if you are travelling ‘down’ the map, the directions will be the opposite of what they would be if you were travelling ‘up’. So while it looks like the shopping centre is to the left of Conway St, actually you would need to turn right.

Once you have worked through the example above, have a go at the direction problems in the following activity: 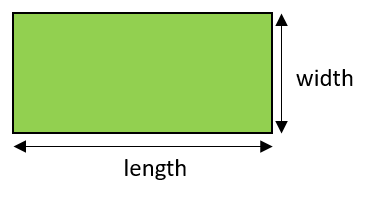 Example: What is the perimeter of the following shape? 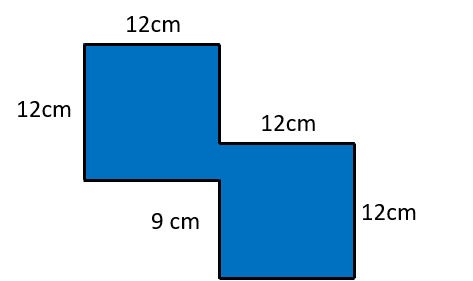 Once you have worked through the example above, have a go at the perimeter problems in the following activity:

The area of a shape is the space inside the boundary. The most common area you will likely be required to work out is that of a rectangle, which simply requires multiplying the length by the width: \(\textrm{Area of rectangle} = \textrm{length} \times \textrm{width}\)

If you need to calculate the area of a triangle, this is simply half the base times the height: \(\textrm{Area of triangle} = \frac{1}{2} \times \textrm{base} \times \textrm{height}\)

Example: What is the area of the following triangle?

Once you have worked through the example above, have a go at the area problems in the following activity:

The volume of a shape is the amount of 3D space inside it. Volume can be measured in cubic metres (or cubic centimetres, cubic millimetres, etc.), or it can be measured in litres (or millilitres, kilolitres, etc.). The relationship between these two kinds of measurements is as follows:

Example: Suppose you have a rectangular fish tank that measures \(50\textrm{cm}\) long by \(30\textrm{cm}\) wide and \(40\textrm{cm}\) high. If you want to fill it three quarters of the way up, what would be the volume of water required in litres?

Once you have worked through the example above, have a go at the volume problem in the following activity: